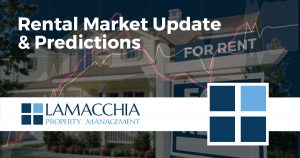 It is without a doubt that the rental market got hit hard due to COVID. Loss of a stable income made the ability to pay or keep up with rent and mortgages extremely hard for both landlords and tenants. The rental world saw and felt a switch flip; one that has since impacted inventory, rates and created competition.

For tenants relief set in when Governor Baker signed the Eviction Bill that lasted until the end of October 2020 that prohibited landlords from evicting tenants and imposing a late rent fee.  The bill also allowed landlords to stop mortgage payments for up to 6 months. Following the Eviction Bill came the Relief Package, a $900 Billion COVID-19 Aid Bill Congress passed that brought much needed rental assistance to tenants and landlords.

So, how does the rental market look now?

Things have started to pick back up as there is an abundance of inventory right now, especially within the greater Boston area and city of Boston, making it a tenant market. Since the announcement of vaccines, there has been an uptick in the amount of inquiries from renters, especially college students who are hopeful that studies will resume as “normal” come September.

Due to increased inventory, we are seeing lots of competition for landlords which they have not typically had to deal with in the past. They are anxious to secure tenants in their rental properties and some, not all, are offering deals such as a free month’s rent to do so. Another concession that has been more common recently has been landlords paying the broker fees which is almost unheard of. Come September we believe this to be a different story.

Massachusetts is home to many colleges and universities, which is one reason why the rental market was so negatively impacted last spring into the fall. Many students did not return last September due to their schools going remote. This resulted in a tremendous number of vacancies, especially in the greater Boston area, since landlords relied heavily on college students renting off-campus housing. In addition, what many do not see or think about are the ancillary businesses that suffer when universities are not in session. Business either do not have that extra help due to less students applying for jobs or they are having to cut back on workers making it difficult for students to find jobs to pay the rent –  it’s a vicious cycle.

The rental market is in flux.  As previously mentioned, some landlords are anxious about renting now and not waiting it out until September since they have been without that second form of income for so long now. Some rentals have been kept vacant as a push back from landlords. Some would rather lose money than waive a fee or a month of rent. The mindset has changed, and they have not had to deal with lack of applicants. On the other hand, there are those willing to accept less than they normally to ensure rent each month.

The increase of college students wanting to secure their off-campus apartments for this coming September however has spiked! If landlords are feeling the effects of COVID they should be sure to keep an open mind and accept that they may not find those who want to rent until the end of summer.

Other than the obvious, one thing we have noticed is that more and more people are moving away from the city. This is a widespread trend among real estate right now. Now that companies are realizing they are fully functional having their employees work from home many have left the office buildings they used to rent which means no commute. This significantly impacts where people choose to live. What used to be the primary convenience of living in the city, public transportation, is a thing of the past, and no longer favored. Renters are starting to move to the suburbs and exurbs, where they can get more space for less money. The city, sadly, is no longer as appealing as it once was.

4. Predictions for the Overall 2021 Rental Market

We do think that the impact of the pandemic was tough enough that it will take a while for the market to recover. If you are currently looking you will tend to find landlords who are willing to negotiate or offer a deal of sorts…for now. We do expect that by the end of the year we will see our “normal” rental market back.

The 2020 rental market took a beating, no doubt, but we are hopeful for a turn around . We urge both landlords and tenants to stay empathetic and understanding to each other’s situations and to work together during these tough times. There is light at the end of the tunnel.